dedicated to
Actor Nirmal Pandey and poet Girish Tewari Girda
(Rajeev from Nainital)
The three day Second Film Festival in Nainital provided a treat of
meaningful cinema to the viewers besides paying glowing tributes to
Bollywood actor Nirmal Pandey and poet Girish Tewari who was better
known as Girda.
“Daayen ya Baayen”, a first movie of its kind that has the life and
problems of Uttarakhand at its core was screened at the event on the
opening day much to the liking of the locals. Bela Negi who is the
scriptwriter, director and
editor of the film is a girl who spent her formative years in Nainital
which is her hometown.

The film is unique in the sense as it is the
the state which is amongst the youngest in the Indian democracy.
Another highlight of the film is that eminent poet Girish Tewari  who
is fondly known as Girda, has acted in the film. Girda passed away in
August this year and has a mass following in the region. Incidentally,
the entire star cast of the film is from Uttarkhand.
The protagonist in the movie “Daayen ya Baayen” moves back to a
village in Bageshwar after working in serials. He gets employment in a
school as a teacher and dreams of setting up a performing arts academy
in the hills. He comes across the ills that ailing the culture of the
hills at present. There are computers but no teachers. Teachers are
more interested in knitting than teaching. The women in the village
are falling prey to the regressive television serials and the entire
culture of market oriented consumerism is creeping in. It is amidst
such a scenario that the protagonist played by Deepak Dobariyal
pursues his dream.
The festival had opened with two documentaries on Girda and Nirmal
that were made by Pradeep Pandey and edited very well by Sunil Bora.
While Pandey had gone on to make a name for himself in Bollywood
giving acclaimed performances in movies like “The Bandit Queen”, “Is
Raat ki Subah Nahin”, “Godmother” and “Daayra”, Girda had stuck to his
roots trying to shake the common man out of stupor and fight for his
rights till the day he was alive. The first one on Girda has been duly
named as “Salaam Girda”. It talks about the multi faceted personality
that was Girda. It
has excerpts of Girda rendering the poetry penned by him over the
years. It also reflects what the poet had to say about the new state
that was to be formed as Girda fought for it in the decade of the 90s.
The movie also has Girda’s viewpoints on issues like education and the
policy that is required to take Uttarakhand forward. Girda had died a
disillusioned man as his dreams of Uttarakhand being a people’s state
with their welfare at its core lay shattered. 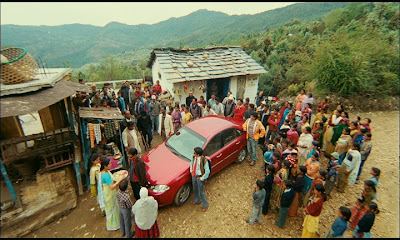 The second movie on Nirmal Pandey aptly named as “Kidhar Se Aaya kahan
Gaya Woh” talks about Nirmal’s
journey from a schoolboy in the small town of Nainital to the fame
that filmdom has to offer. The movie shows how Nirmal was attracted
towards theatre amidst an upbringing in an ordinary middle class house
hold and how he went on to struggle hard to get his due in Bollywood.
Few people are aware of the fact that he had chucked a government job
to pursue his passion.
The opening session of the festival was marked by honoring of artist B
Mohan Joshi and academician Prayag Joshi who hail from this region. A
souvenir was also released on the occasion that mainly contains write
ups on Nirmal and Girda.
A bonanza of short films had awaited the viewers on the second day of
the Festival on Saturday. The audience was treated to a series of
films on contemporary issues of national and international importance.
The day had begun with a small film on folk balladeers of Champawat
region of Uttarakhand “The Legends of Joshia Dhamai” that was made by
Sudhir Gupta. It contained large excerpts of Girda explaining the
relevance of the art form in the modern world. Girda was an exponent
of the folk and culture of Uttarakhand.
The pick of the day however was the Persian movie by Bahman Gobadi
“Turtles can fly”. Shown with the English subtitles, the movie deals
with the plight of children in a war ravaged country brilliantly
depicting the suffering of humanity at the altar of politics of war.
The movie is about the children injured in war living in a village in
Iraq. Made in 2004, it is set in a Kurdish refugee camp on the
Iraqi-Turkish border on the eve of the United States’ invasion of
Iraq. The protagonist who is a 13 year old Satellite (Soran Ebrahim)
is known for his installation of dishes and antennae for local
villagers who are awaiting the news of the fall of Iraqi President
Saddam Hussein. He is also known for his limited knowledge of English.
However, he is the dynamic, but manipulative leader of the children,
organizing the dangerous but necessary sweeping and clearing of the
minefields.
The industrious Satellite arranges trade-ins for unexploded mines. He
falls for an orphan named Agrin (Avaz Latif), a sad-faced girl
traveling with her disabled, but smart brother Hengov, who appears to
have the gift of clairvoyance. The siblings care for a blind toddler,
who happens to be the son of young Agrin who was raped several years
ago.
Later in the day a film named “For Maya” made by Vasudha Joshi was
screened. It deals with four generations of women in the hills of
Uttarakhand and presents a picture of the plight and status of women
in Uttarakhand. Vasudha’s another movie “Almodiyana” was screened on
Friday evening. The movie brings to life the unique Dussehra
celebrations of Almora.
The other movies screened during the day were “ Andhere se Pehle” by
Ajay TG, “From Hindu to Hindutva” by Debranjan Sarangi,“Kithe mil ve
Mahi” by Ajay Baharadwaj, “Khargosh” by Paresh Kamdar and “Niyamraja
ka Vilap” by Surya Shankar Dash.
These films on socio-economic and political topics that have a
significant relevance in the present day scenario of the nation
managed to make a good impact at the Festival. One of the movies that
generated a debate was “Kithe mil ve Mahi”. The film very effectively
deals with issues related to the Dalits in Punjab, a subject that has
mostly been swept under the carpet. It depicts what the Dalits who
have strived hard and have managed to become vocal on the issues
related to them, have to say on the socio-political processes in the
nation. It has excerpts from interviews of Dalit Qawwal BS Balli
﻿
﻿

Paslewale, Dalit poet and a convert to Islam Lal Singh Dil and one of
the last “heroes” of the Gadar movement Baba Bhagat Singh Bilga. A
very strong statement issued in a stoic manner,”Jo log ladte nahin
hain unhe gulam bana liya jaata hai (Those who do not fight are
subject to slavery)” underlines the tone and tenor of the movie.
The director has delved into the roots of Sufism as it prevails in the
Punjabi culture in the modern times. Participating in a talk after the
film, famous film maker Sanjay Kak,”Contrary to the general perception
of Sufis being Malangs and disassociated with the  social happenings,
I want to say that Sufism has been very radical in making strong
political statements. This is visible both in Kashmir as well as other
parts of the country.”
Another film that dealt with the issue of communal strife and
intolerance that have been on the rise in the country over the last
two decades was “From Hindu to Hindutva” by Debranjan Sarangi. Shot
after the Kandamahal riots, the movie talks about the processes and
forces that lead to communal or sectarian polarization in society.
These processes have been visible at several places including Gujarat
over the last two decades. The director has tried to depict why Dalits
and Adivasis were pitted against each other and how religion was used
as a potent tool by right wing forces to foment trouble across the

region in which 38 people were killed while three went missing. The
director has asserted that the Indian middle class and its mindset has
a major role in the processes of polarization that are at work in the
country.
Yet another film dealing with the contemporary issue of acquisition of
land belonging to tribals in the name of development made a mark at
the festival. “Andhere se Pehle” by Ajay TG deals with the fight of
the tribals against the attempt of the government to “usurp” their
land for starting a thermal plant in Raigarh district of Chattisgarh.
Meaningful cinema that provided good entertainment has also been a
part of the festival. In this category “Khargosh” by Paresh Kamdar and
“Chutkan ki Mahabharat” were shown and applauded by the audience.
The take of the final day was Sanjay Kak’s “Jashn-e-Azadi” that delves
into the issue of what Azadi means to Kashmiris.
The film traces the developments in Kashmir right from the first
movement for Azadi in early nineties to what was happening in 2007. In
between he talks of the migration of Kashmiri Pandits, the arrival or
mercenaries from abroad, the phase of counter insurgency led by
Ikhwans, the movement being led by groups in favour of Pakistan and
then the disillusionment with both India and Pakistan. It talks of
what Azadi or freedom means to Kashmiris. The film also traces how the
youth there has lost faith in both the legal system, the human rights
groups and other institutions.
a comedy, it hits hard at the prevailing socio-economic scenario of
Posted by jahangir raju at 12:21 AM